This Candidate is Such a Loser!

It's true, this story tells of a disastrous campaign. But despite the all-too popular notion, winning isn't everything. (It's NOT?)
I was pleasantly surprised to get this boxful of books from Penguin Random House a few days ago. It was just released and available for purchase here. 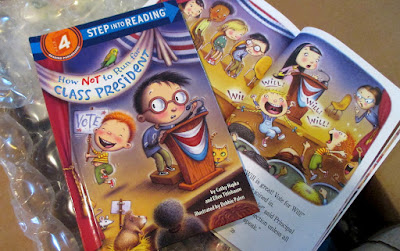 I had previously illustrated two others books for this publisher, featuring the same characters, for their Step into Reading imprint.
This book, How NOT to Run for Class President, is for kids who are old enough to vote in their  school elections, and can read paragraphs and simple sentences.  Sentences like: "Don't forget to promise pizza and a movie every  Thursday, " Steve whispered.
A brief synopsis:
Will is reluctantly running for class president against his more qualified classmate Chelsea.  He is unexpectedly embarrassed by the enthusiastic but unsolicited campaign advice of  Steve, his younger brother, who enlists the grass-roots support of his kindergarten friends.  Hijinks and mayhem ensue, pets invade, and ultimately Chelsea wins. Will learns some lessons in the process yet Steve remains irrepressible.
Here are some of my favorites from the 29 illustrations.