I just had to post a few of these sketches for a new reader for Red Chair Press. The character is an anti-bully hero who teaches other kids how to fight bullies the right way.  I love creating characters for books and following the thread of a story. I will post more soon! 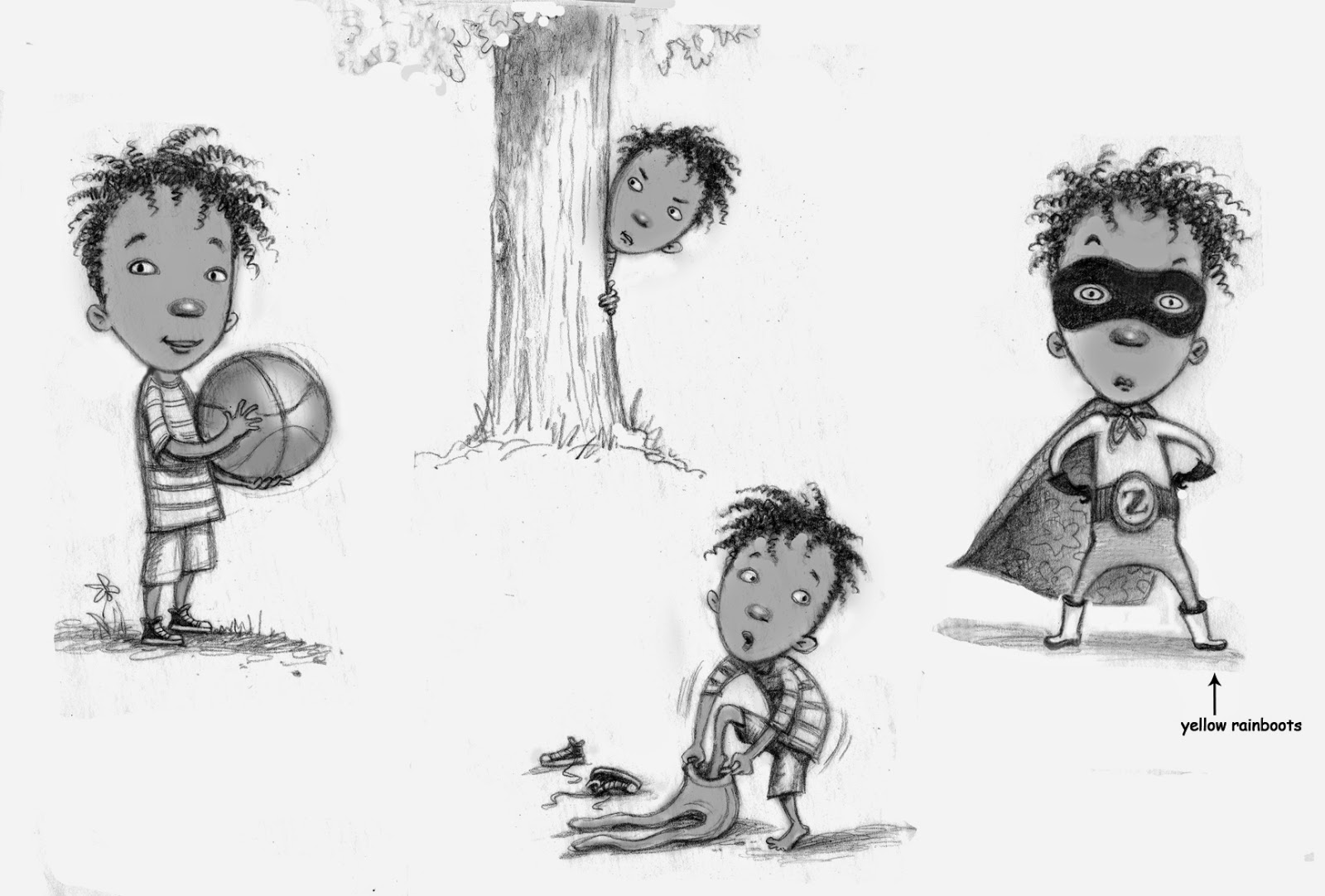 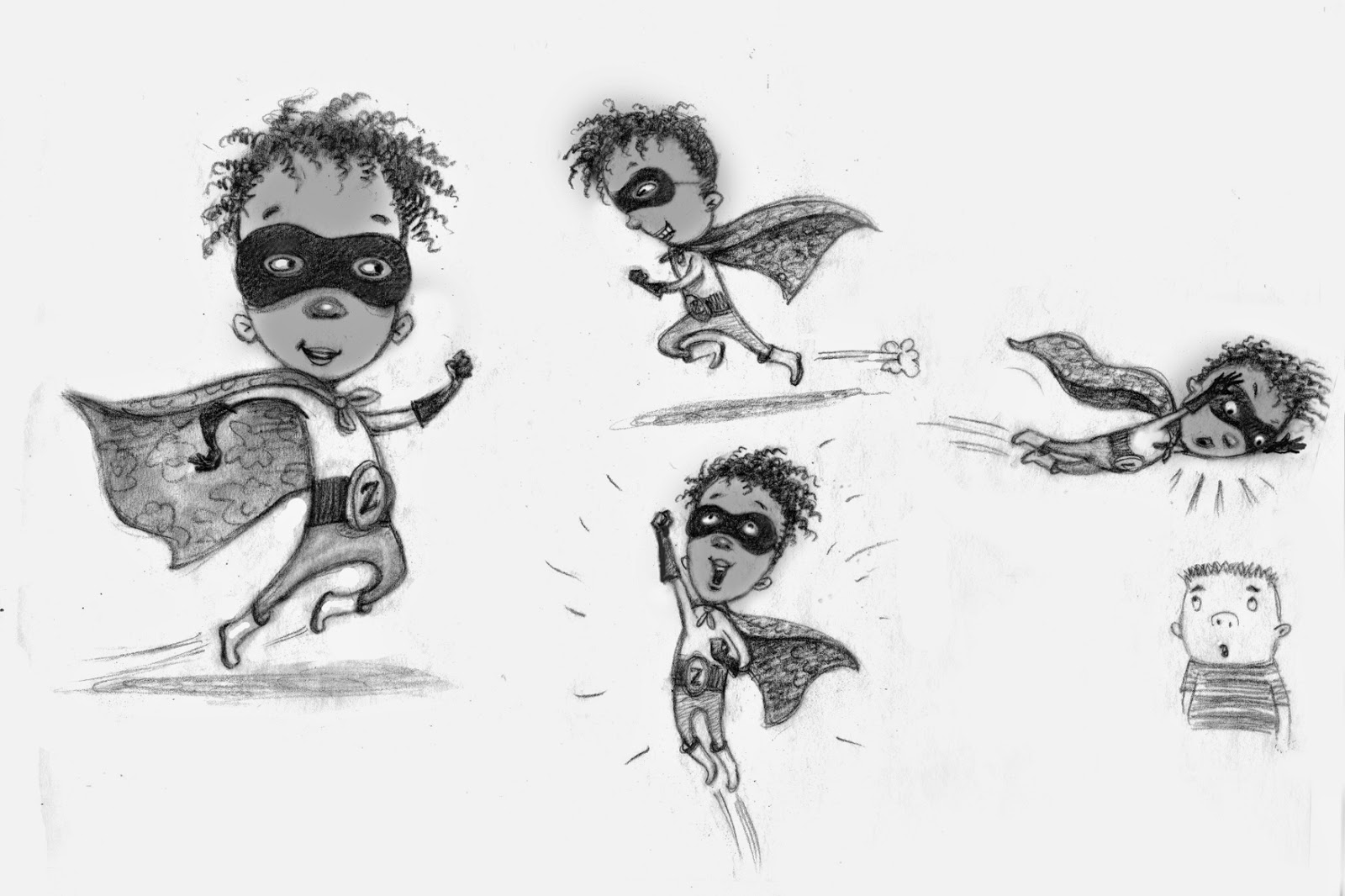 I'm also working on a rather challenging cover for High Five.... only challenging because of the  limited space. I especially love creating woodland animal characters. The initial sketch with all the extra graphic elements ghosted (me vs. the barcode = barcode :1, me: 0): 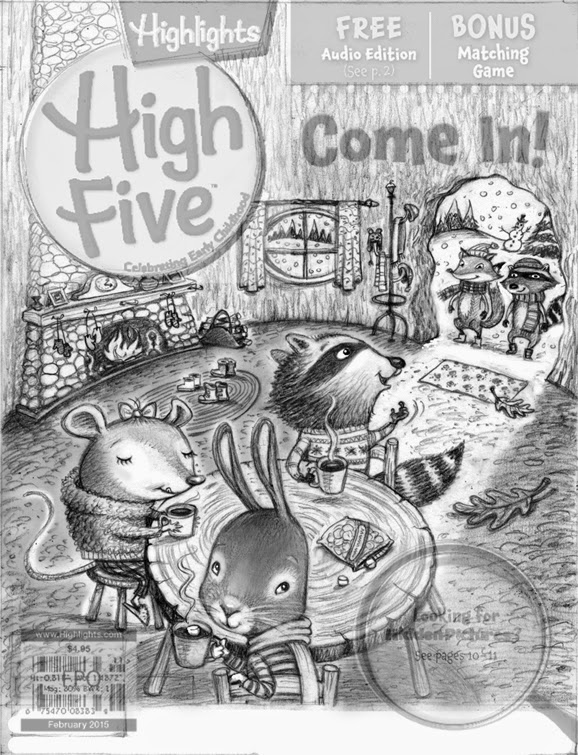 This last assignment for Ranger Rick was a challenge I heartily accepted and I knew I had to find the time to talk about it, even though blogging seems to have taken a back seat to actually doing the work. A way back seat, like in the old station wagons.  I've been too busy driving and not looking back at where I've been.
Aspen groves are a unique ecosystem.  Because of climate change,they are dying from drought, disease and insect attacks in some areas. Read about it here . They are found widely all over the country.  The leaves flutter or "tremble" in the breeze because of their unique structure. (The stems are flat instead of round.) They are a special place where many different kinds of animals  can find food. Hence the writer Ellen Horowitz metaphorically named this 4 page story "Aspen Grove Grocery".
My first surprise was that I would be merging my art with a photo on the first spread.   I've not attempted that technique with this level of complexity before.  The photo and my sketch: 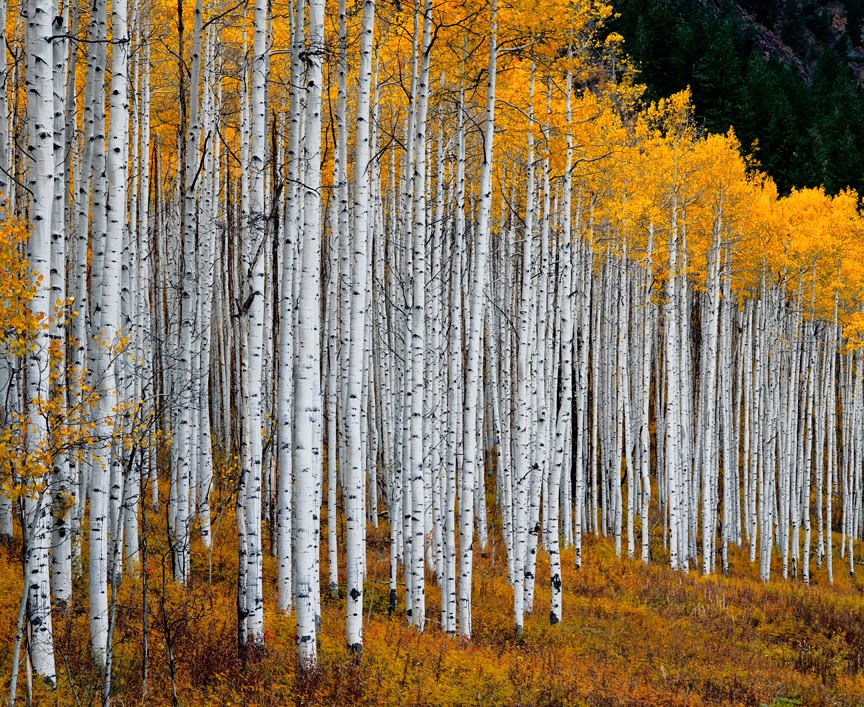 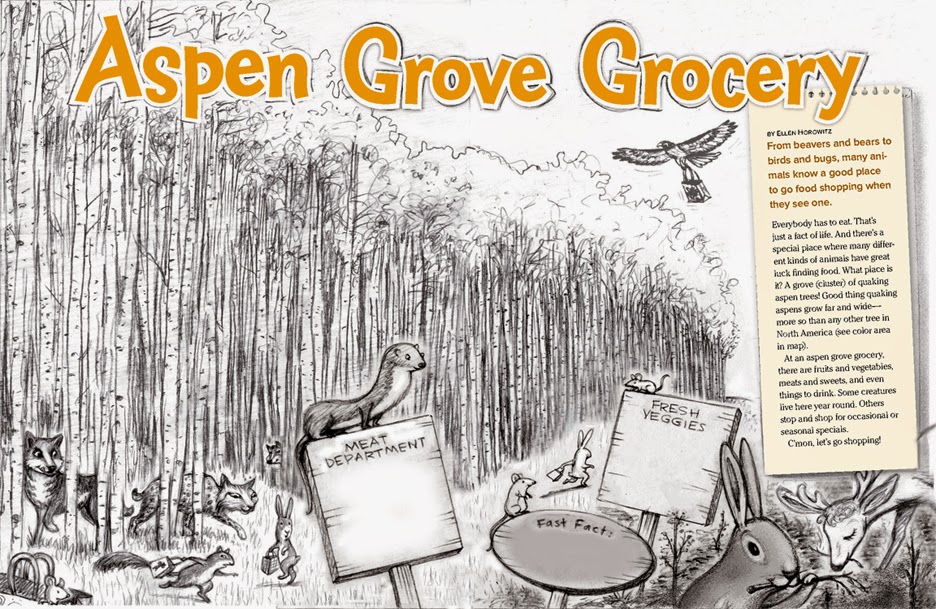 My second surprise was that I would be depicting some predators. Maybe it was to much reality for me, so I tried to interject some humor by giving shopping bags to some of the  prey (eco-chic of course). Hey, if they have to run they might as well look good doing it. The signs would accommodate more copy and interesting facts, like "Fresh Veggies": after a wildfire, new shoots and stems quickly sprout and become food for deer, elk, moose and rabbits. 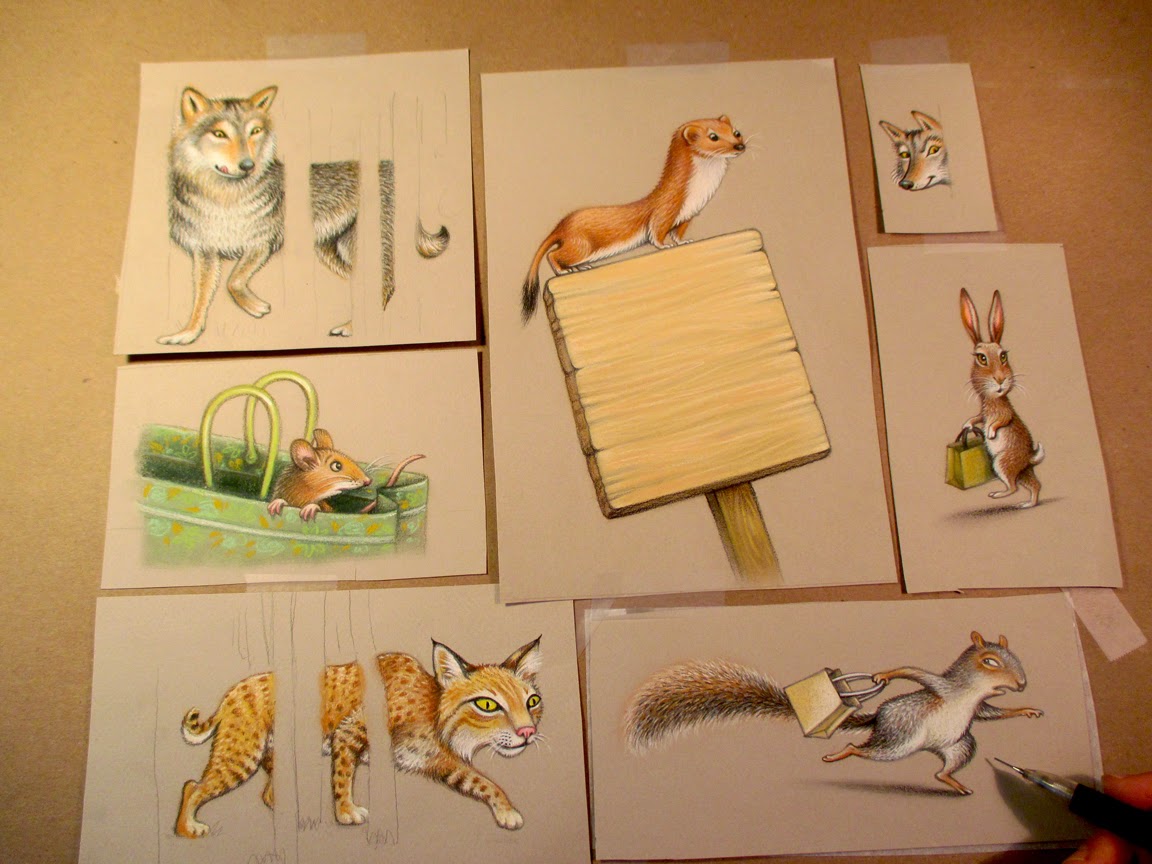 My first step after sketch approval was to draw each animal that would be tucked into the photo of the grove. Pencils and pastels on mi tientes paper. Later I decided to leave out the mouse in the green tote as I felt there was too much activity on that side of the spread.
I scanned the art, removed the paper background tone and began the merging in photoshop. 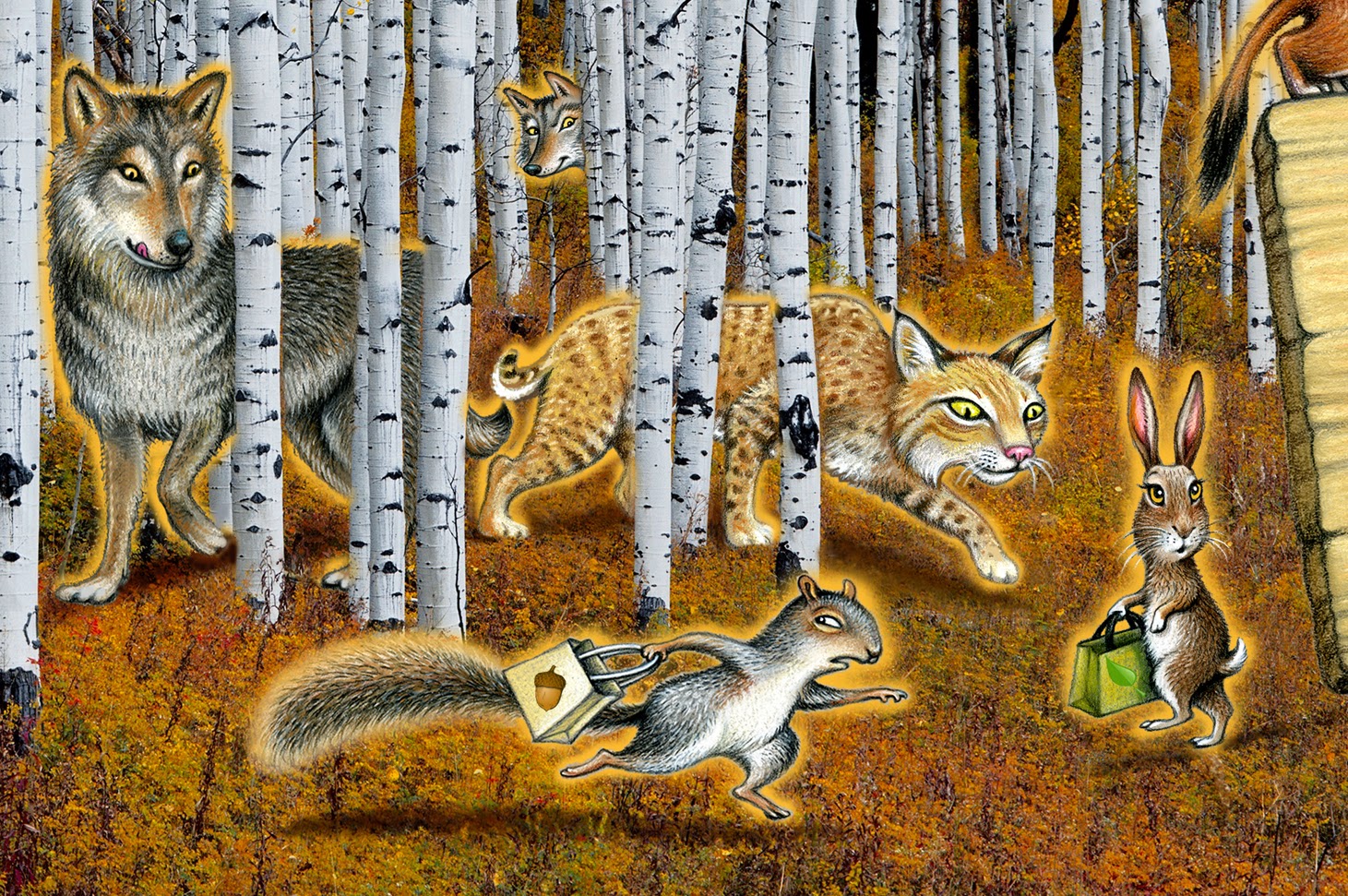 I reduced the bobcat's head from my original drawing and elongated the wolf vertically.   I added graphics on the totes. I added cast shadows.  Before I added the glowing aura around them they were not defined enough from their surroundings, so that turned out to be a good device. 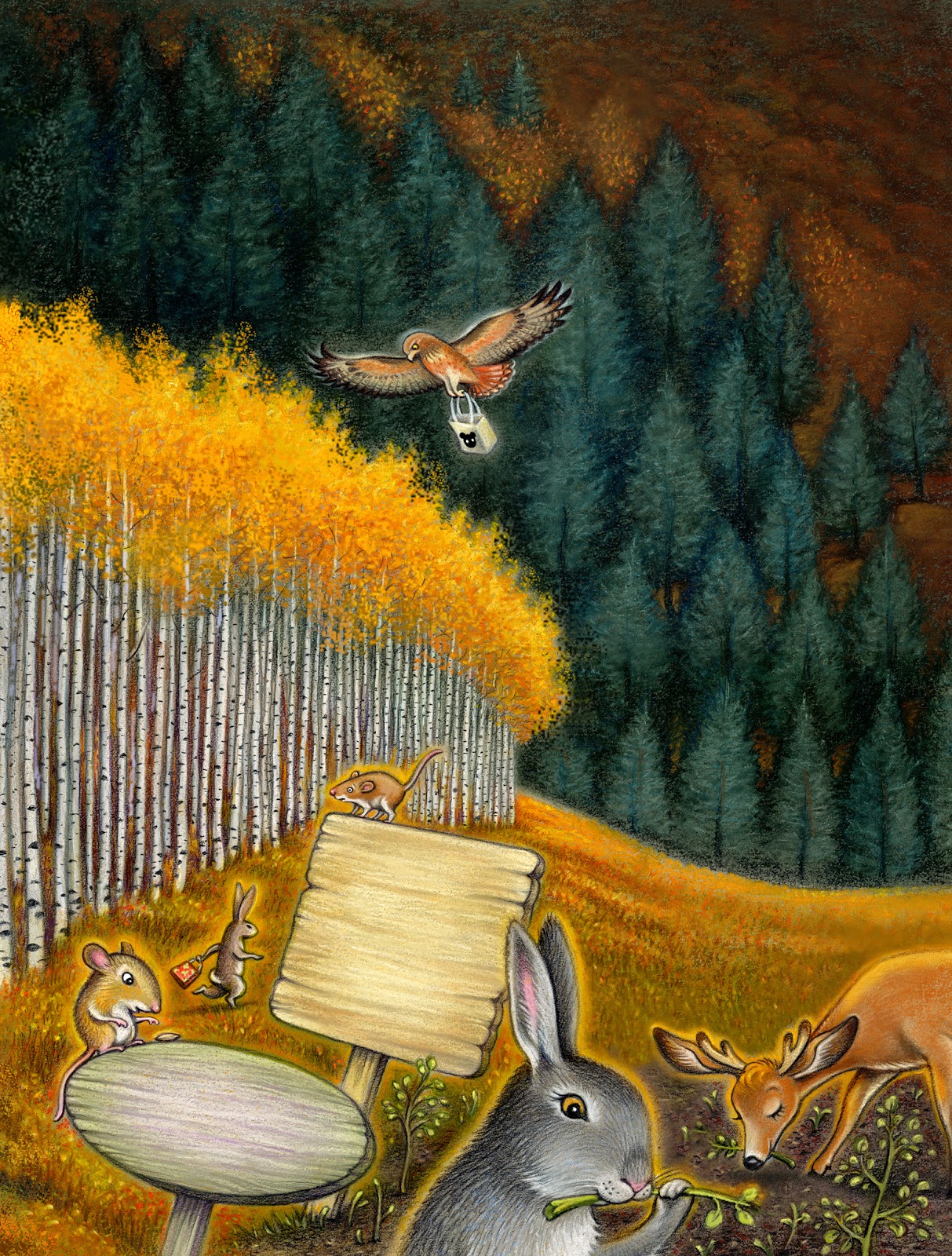 The right page was a continuous piece of traditional media art with a bit of digital modification that enabled me to match the colors in the photo . 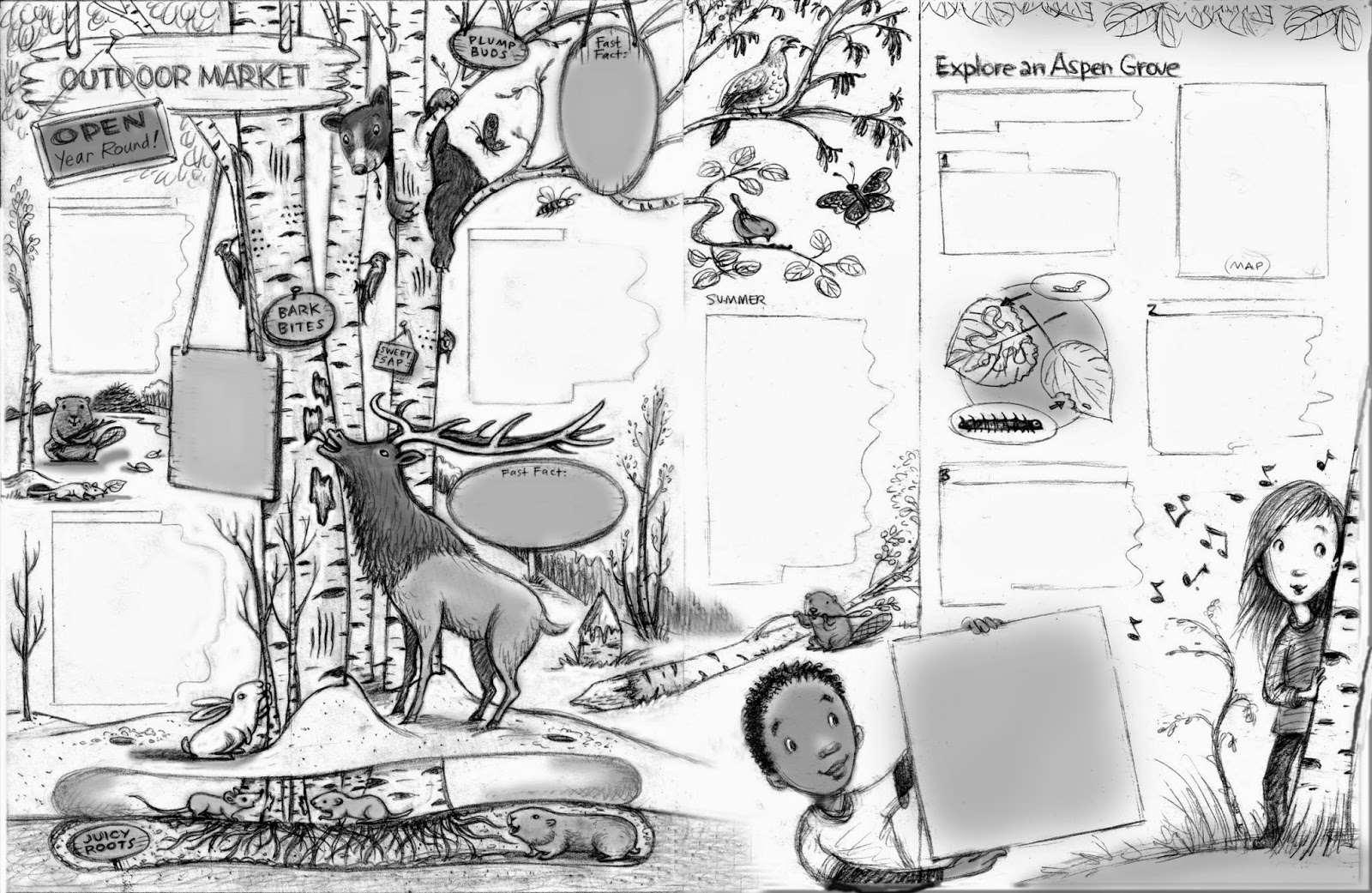 My sketch for the second spread had to accommodate so much text! I did two rounds of this one. I continued the theme of signage and even came up with some words for the little signs like "Sweet Sap","Juicy Roots" and "Good Wood".

This  one needed to have a much lighter and brighter palette because it was so text heavy.  And it needed to reflect the four seasons.  An interesting fact is that each new tree in a grove grows from the roots of the other aspens, making each young tree an identical twin of the original tree. Another thing I had never heard about is the music. If you put your ear right up to an aspen tree on a windy day you will hear tinkling sounds. It's the fluttering of the leaves traveling all the way down through the tree. 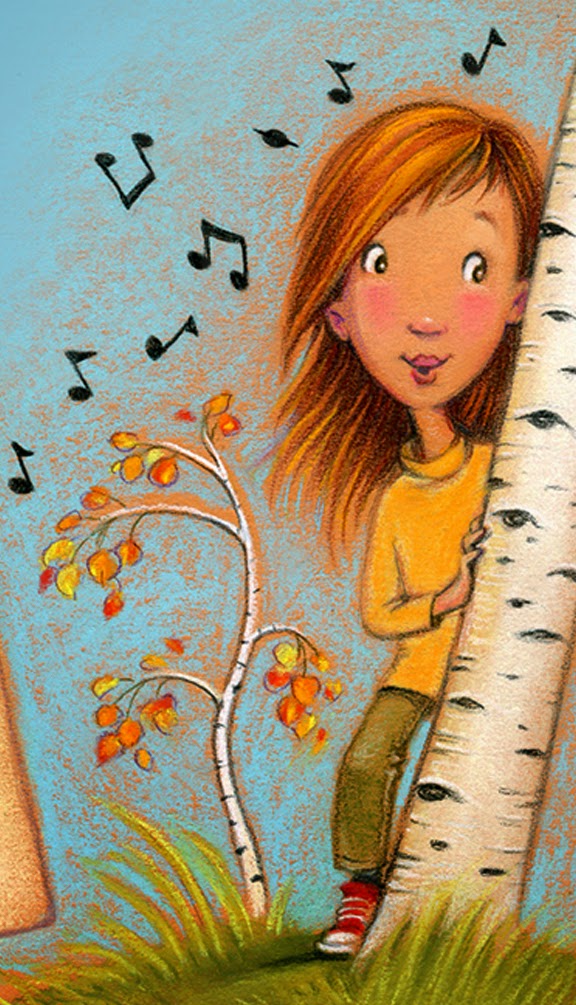