Last weekend was the MIdwest SCBWI conference; a round-up of authors and illustrators from four states: Ohio, Michigan, Illinois and Indiana, and 19 luminaries in children's books from various parts of the country.
The universe seemed to be indicating that I should go. A 24-page reader finally completed. No impending storms. 2 new tires on the Toyota. That rattling noise? Probably nothing. Tofu burgers and green drinks in the cooler, postcards, vitamins, hand sanitizer, yoga mat, flask-hidden-in-a-diary...
I couldn't get away until rush hour on Friday. I missed the "wild wild west" costume contest and meet and greet that evening. Oh well.
The next morning, tired but wired; I zombied around in a sea of alien faces sporting a tight, panicked smile. Then I spotted Troy Cummings, fellow illustrator, author and facebook friend. I was betting he would look similar to the guy on the cover of his recent book, Giddyup Daddy, and I was right.  Neither one of us had been to an SCBWI conference, and he had made me aware of it back in March I think. I was intrigued by the line-up. But Fort Wayne Indiana!?  What's in Fort Wayne? Of course, it's a magnet for jet-setters.
Turns out those Hoosiers know what they're doing. It was a very inspiring conference.

I'm such a fan of Peter Brown. 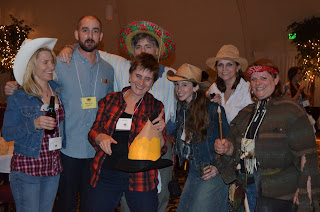 Here he is being a good sport. I think that's Matt Faulkner, another wonderful faculty illustrator, beside him. Hello silly cowgirls... my new friends.
As I listened to Peter describe how he combined influences from Noir films and Twilight Zone and Loony Tunes for his latest book, Creepy Carrots, I thought of a gourmet chef, collecting styles instead of spices. He takes things that he loves and artists that he admires, then combines the ingredients together in just the right proportions to find his vision. Each of his books has its own unique atmosphere. Chowder and The Curious Garden are miles apart, but still his own. It was fascinating hearing about his process, and he's such a natural comedian.  Check out Peter's blog for news and some interesting photos of his recent Vietnam trip.

I had heard that Laurent Linn is a great art director, but I had never met him. As art director/designer/collaborator for Simon and Schuster Books for Young Readers, he has been working with some of the best authors and illustrators.


Among his many  other other credits, he was an Emmy-award winning creative director for Sesame Street (he designed and built puppetry for the Muppets, starting with the original JIm Henson Muppet Workshop). He is also a great friend to SCBWI, travelling to many of their conferences.


As Laurent showed us his favorite author/illustrators and talked about the dynamics of doing both, I realized he really loves illustration and has a deep understanding of visual storytelling, character and emotion. And when I told him I liked his shirt, he showed me that he had some snazzy socks too. But I didn't get any pictures of them.

There were many insights from Jane Yolen, Lin Oliver, Franny Billingsly, Matt Faulkner, and Rhonda Gowler Greene, among others. Way too many to post here. 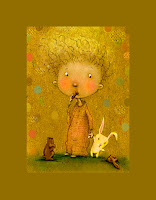 I entered this kid in the juried art show for unpublished work. To my surprise he won best of show!

There was some amazing work among the 40 entries. The three runners-up were Troy Cummings, with his palsy-walsy engine and caboose, Sheralyn Barnes, who brought her snuggly big bear and snoozy girl, and Mike Desantis, showing an angry alligator and friends. 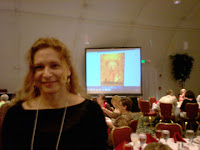 This was shot soon after Laurent LInn gave a really cool review of my piece on the screen in the main ballroom.  Notice the empty seats and the bored people; obviously because Laurent has left.
It was great talking with him one on one and he encouraged me to pursue this direction. I'm working on sketching some new friends for the kid and mapping out a story.
The faculty was brilliant, I was awestruck and dumbstruck, the energy was great and I met so many generous and interesting people. Thanks to Kristi Valient, regional advisor and coordinator of the art show and author/illustrator.
Thanks to all the coordinators and volunteers.
Thanks also to my boyfriend Dave and his mother, Natalie, rest her soul, for the little gold easel she bequeathed, which just happened to provide the perfect accent for the Klimt-inspired background. (and thanks, Gustav!)